And our wars of culture rage.

But who knew we were fighting over a window? Specifically the Overton Window. The Shangri La of policymakers in which policymaking is stress-free. Shangri La because these days the valley has become imaginary. For there is no window anymore through which we all can examine her contours; or perhaps more articulately stated there are two main windows, both shining onto different Himalayan valleys neither of which look anything like each other and both of which are in some ways thorny and fraught and perilous. Unrealistic. But why? It’s because our post-modern world has become wrapped in mists and legends, fables teaching us about the world around us (in the form of news which is now at least partly “fake” and facts that have become somehow “alternative”).

Some of this is actually a good thing, for example where the cracks in the veneer of the dogmatists are allowing some small lights of truth back into our society; pressures against “settled” science experiencing a resurgence, a renaissance in knowledge and inquiry.

Take, for example, evolution. Since the Scopes Money Trial (I drove by that spot in Tennessee last Christmas) we have been told that evolution is settled science. A done deal. Our secular 1990s put the issue to bed definitively, enshrining it in our curriculum and taking prayer from our classrooms – and the Creationists? Cranks; Bible banging Jesus freaks; witch-burners. The Overton Window was in its sweet spot, where pro-evolution scientists could discuss amongst themselves and indoctrinate my six-year old telling him he came from a monkey – filling cartoons and Sesame Street with their hypothesis (yes, hypothesis – as in “a supposition or proposed explanation made on the basis of limited evidence as a starting point for further investigation”). Now, alas for the settled scientists, things have in fact become unsettled using (wait for it) more advanced science. A new study by Stoeckle and Thaler has revealed (after an epic feat of DNA analysis involving more than 100,000 specimens) that 9 out of 10 living creatures emerged simultaneously about 200,000 ago. This of course lit up the blogosphere of the scientific world and turned evolution on its head. Sure, the age old question “How then did we get here?” is again on the docket. And its gonna take the textbooks a generation to recover; government education at its finest!! But we can now get back to the process of learning. The Overton Window just shifted – and challenging evolution no longer is suicidal. I can go on (there’s a new archaeology book that challenges the ‘settled’ story that America was populated by nomads from the east of Russia over an ice bridge) – but I won’t digress any further. You’re welcome.

But that is science. Its impossible to fight against scientific inquiry, however hard you might try (ISIS is just now allowing that, perhaps, the world is not flat); and the doctrinaire evolutionists in their crumbling towers or the new-world-populated-by-tribes-from-Kamchatka groups are gonna have to adjust.

But what about the more turbulent waters of society; of governance and economics and the nature of legitimacy and role of the state in the lives of individuals? It is in this arena, they like to call them the ‘social sciences’ but there is nothing scientific at all about them, where the situation is dramatic (see the below video on the degree to which our two parties have become two tribes). The problem, of course, is that ‘social science’ is about the interaction of humans – and as such does not lend itself to scientific inquiry. It is hard to ‘know’; especially when we reject the means by which we are able to ‘know’ (this is incidentally what conservatism seeks – to preserve the founts of ancient knowledge and understanding – it’s called wisdom – and protect them from the maelstrom which surges around). In this case the Overton Window battles are taking place wholly within the two camps, in which nair the twain shall meet (a congress which is necessary in a healthy republic – hence the term ‘congress’).

Case in point, this morning I read an interesting exchange between Sohrab Ahmari (the managing editor of the NY Post) and David French from the National Review with the ‘moderator’ or third rail being Michael Brendan Dougherty; the point of which was Ahmari accusing French of being basically accommodationist, that French believes “that the institutions of a technocratic market society are neutral zones that should, in theory, accommodate both traditional Christianity and the libertine ways and paganized ideology of the other side” with French responding that, “Moreover, I firmly believe that the defense of these political and cultural values must be conducted in accordance with scriptural admonitions to love your enemies, to bless those who persecute you, with full knowledge that the ‘Lord’s servant’ must be ‘kind to everyone, able to teach, and patiently endure evil’.” Basically, the debate within conservative circles these days of whether to “go to the mattresses” against the illiberal progressives or to attempt to reason with them. These are old fights (most people have forgotten that sixty years ago there was a fight for the heart of conservatism between Bill Buckley and Ayn Rand. Buckley won… – I wonder what America would look like if it had been Rand?). But they are reinvigorated by intellectual Trumpism (JAG anyone? Flight 93 Election? American Affairs Journal?) which certainly has pulled the Overton window way in the direction of a higher conflict agenda; “finally fighting back” many conservatives would say – a fight that no conservative in recent history was willing to prosecute – and they may be right about this.

To be sure, the ‘left’ is also having their own Overton Window debates, with the illiberal progressives pushing socialism against a more modest strain which does not cradle national suicide as its collective ambition (maybe Joe Biden?). But I rarely read those debates – I read them for years in Venezuela, there’s nothing new there for me. For you either, incidentally – if you bother to read history.

This also explains why the fighting has become so brutal between the two tribes. The Overton Window represents compromise in the minds of those living in good faith within a society and well within the tensions allowed in the heart of liberalism (in the correct sense of the word) between liberty and equality (as Edmund Fawcett would argue); a situation where nobody is really happy but they will not oppose an action because they fear being caught “outside” the range of accepted societal discourse – with all the implications that excommunication brings. But if government is the great club with which to bludgeon your enemies (and for the socialists loot their goods); then of course the fight over its possession is existential. Case in point, the smoke had not even yet cleared over the funeral pyre of DOMA when the illiberal progressives were pushing trans-gender bathrooms for our six-year olds. The conservatives have responded with making abortion virtually illegal (presumably trying to pick a Supreme Court fight). I’ll let you guess which side has my sympathy.

None of this is a recipe for the success of our republic. Because we have problems to solve. Burgeoning debt; immigration crisis; emboldened enemies; failing school systems; colleges which no longer teach our young-adults anything except how to quote Marx and hold a beer bong – etc. Those all require good faith debates between good faith people within an Overton Window in which we are all looking down into the same golden valley. But how do we get there? We talk to each other – because I do believe that there are more freedom-loving people in our republic than totalitarian socialists. If we can find a way to engage together, we can leave the commies out standing upon the darkened mountainside engaged in a creepy séance as they attempt to raise the spirit of Vladimir Lenin, while together we seek out our golden valley. 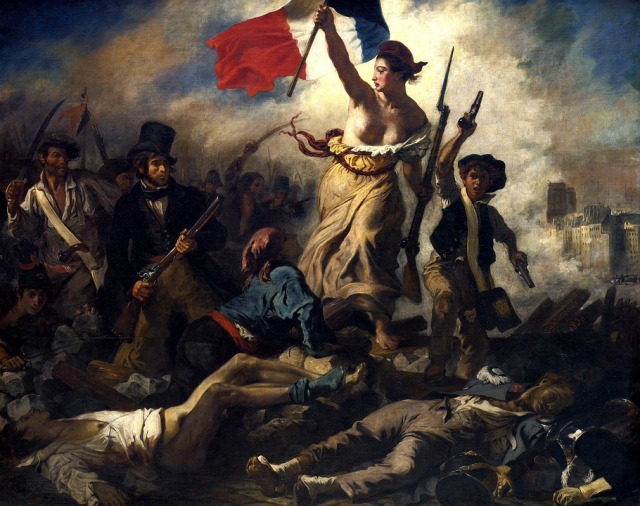 For there is no other way – lest our culture war turn into a real shooting one.

Joel D. Hirst is a novelist and a playwright. His most recently released work is "Dreams of the Defeated: A Play in Two Acts" about a political prisoner in a dystopian regime. His novels include "I, Charles, From the Camps" about the life of a young man in the African camps and "Lords of Misrule" about the making and unmaking of a jihadist in the Sahara. "The Lieutenant of San Porfirio" and its sequel "The Burning of San Porfirio" are about the rise and fall of socialist Venezuela (with magic).
View all posts by Joel D. Hirst →
This entry was posted in America, Liberty, philosophy, Uncategorized. Bookmark the permalink.