Remember climate apocalypse? The little girl lectures, scowling in hatred at the leaders of the free world because they refused to do what they were told?

Those days almost seem quaint and comical in the mess that 2020 has become.

And you’d be forgiven if you, like me, are experiencing a certain degree of whiplash. We went from Greta’s adolescent tantrum-based apocalyptic environmentalism to COVID-19’s viral end-of-days to the re-emergence yet again of the Robespierres attempting to convince us that ‘original sin’ exists (which most of us believe) but it is actually a genetic trait, and one that justifies the destruction of public property and theft of random strangers’ hard earned things.

The Gramscians in our midst never cease, we know that – this is not news. Always anxious to seize on a random occurrence or a pandemic to attempt to make their case for more state power, but only if they control the state. Control, that is the only word – to build utopias for the faithless who are so miserable and angry and jealous they can only grasp desperately to that ancient refrain “misery loves company” in the hopes that somehow the violence will be for them a balm, a salve over their aching burned souls filling the emptiness where God should be. Except it never is, and therefore the destruction can never be enough.

If anything, we learned that in history. Most recently in Venezuela, where the felling of a statue of Columbus announced a coming suicide, one that has continued on in a never-ending spiral of violence unto famine. 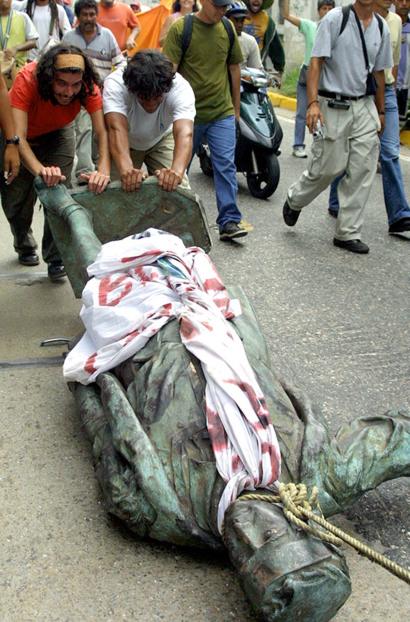 I have ordered a new book, if the mail ever arrives. I will review it properly once I have read it, but it seems sufficiently important to comment upon more than once, given its topic (the ‘progressive’ use of environmentalism as a bait and switch) and the fact that when the pandemic is over and electoral-violence-encouraging is over when this election is past (whoever wins), the little Swedish girl will be back bored and energized and with visions of epic climate-lockdowns dancing in her sweet little head. And this book is especially important now because we are entering a new era of state power. The global economy has faltered; our China-based model of “They make our cheap crap with their slave-labor which we buy at Walmart” is has been debunked, probably for good. Debt is the order of the day, piles and piles of bleeding red refuse under which we are all being crushed. Governments are again the major players in our private economies, owning the airlines and ‘strategic industries’ and control a few mega-corporations (Amazon, for example) – setting the stage for a “Road to Serfdom” moment as grand as anything Friedrich Hayek could ever have imagined.

Enter onto the stage Michael Shellenberger and his new book, “Apocalypse Never: Why Environmental Alarmism Hurts Us All”. Again, I have not read the book – I just ordered it and I will give a full review when I have the chance. But I have read with interest his article “On Behalf Of Environmentalists, I Apologize For The Climate Scare”.

Several points are important. The first one is just how far down the logical fallacy trap humanity has gone. Shellenberger feels it important to include in his presentation of the book his own “leftist” credentials, including time spent with the Sandinistas in Nicaragua (not something I’d brag about, I too have spent time in Nicaragua – not with the Sandinistas) as a defense against those who would criticize him for not being leftist enough: or in “logical fallacy” terms an “appeal to authority” to counter the “genetic” fallacies to be hurled against him. But does one fallacy counter the other? Never-mind.

The second point, however, is that he is right. Not in the “logical fallacy” way or in the “he ticks all the right boxes” way in his pedigree and voting record, but it would seem he actually has looked at the data and come to the right conclusions. This is not to say (at least by the appearance of his article, I’ll let you know when I read the book) that he is a climate denier. Instead he has found the discipline to be a true environmentalist, not an armchair warrior looking to steal people’s stuff through “carbon credits” and wealth redistribution efforts to corrupt despots where the dictators get jets and the United Nations bureaucrats overseeing the transfer get expensive vacations and we get nothing. No, a true environmentalist in that he sees that it is deforestation in the third world that is the greatest problem (poverty is the greatest polluter, as Indira Gandhi once said); that while the climate gets hotter (probably because of sunspots) that will lead to a re-greening of the world (if we let it); corollary to this is that the greatest threats to species on this crowded planet is us and our murder of animals; that industrial agriculture is much ‘greener’ and less intrusive on agriculture than the poor farmer in the Chad basin attempting to coax a maize chute out of a barren land beside a desiccated lake; that carbon emissions are coming down in the rich world – and more!!

Now my own “logical fallacy”, an appeal to emotion (though I certainly don’t have the right pedigree to avoid assault – I fought Hugo Chavez at every turn and in every way I could imagine). I’m not an environmental denier either. I have walked through jungles in the Congo eerily absent the cacophony of animal life; the shrieks of the tiny jungle elephants and the screeching of the chimpanzees and the squawk of birds all stilled and silent, having been hunted out and killed to adorn the tables of the poor and the rebels. I have watched the last tree in the Sahara being chopped down for under its precious shade it once gave respite to the jihadis. I too fear the plastics; I too sorrow when my son (my little non-Greta) says he wants to be a marine biologist and I worry there won’t be much left for him to study.

All this is why Shellenberger’s work is so important; we must get this right!! We cannot afford to lose time on facile answers by the nouveau Marxists who use environment as a bait-and-switch to steal and destroy. I repeat, it’s too important, for if we allow them to control the narrative we will find ourselves, in another several decades, having pulverized our cities and destroyed our industries, eliminating the wealth we need to restore our world – while having done nothing for the little animals.

I am cutting and pasting here the summary of conclusions from Shellenberger’s own article:

Joel D. Hirst is a novelist and a playwright. His most recently released work is "Dreams of the Defeated: A Play in Two Acts" about a political prisoner in a dystopian regime. His novels include "I, Charles, From the Camps" about the life of a young man in the African camps and "Lords of Misrule" about the making and unmaking of a jihadist in the Sahara. "The Lieutenant of San Porfirio" and its sequel "The Burning of San Porfirio" are about the rise and fall of socialist Venezuela (with magic).
View all posts by Joel D. Hirst →
This entry was posted in Book Review, International Affairs, Uncategorized and tagged environmentalism. Bookmark the permalink.