I am haunted by mountains, ancient and immutable, unconquerable and mysterious fortresses to the past. Sinews and muscles attached to bone, enveloped by a thin layer of skin, ripping upon contact with a rose thorn or bramble; that is not a substantial substance upon which wisdom can be written, it would seem. But a mountain, which experiences the passing of time as waves of snow and drought, of thunderstorm and lighting washing upon her only to move on, leaving her unchanged. Perhaps that year with a greater sparkling of white upon her crown, perhaps this year lesser. But the solid rock upon which is found to be written the passing of an age, that material at least does abide. 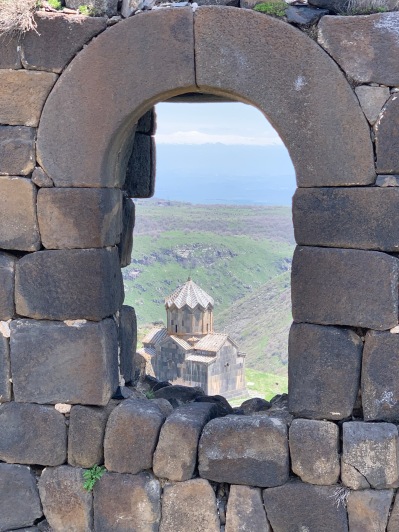 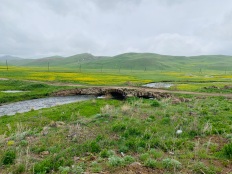 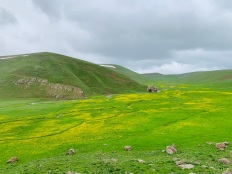 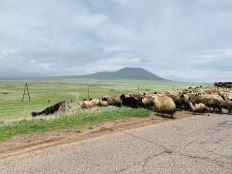 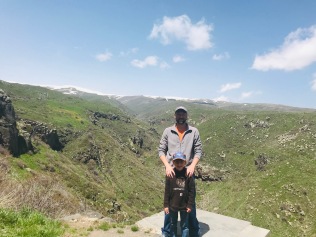 I’ve been passing my days in the mountains, waking under the supervision of one to travel high up into others on my search for peace; peace which is always to be found high above the madding crowd. Hiking into the snows with my little boy to leave a snowman up there somewhere upon a crest, an oh-so-fragile reminder to the mountain that thereby we passed, as fleeting as the seasons while the mountains are eternal. Wading through the frigid mountain streams products of the runoff from the melting of this winter’s bountiful snow, to feed the streams and brooks and rivers below which irrigate the plains and re-green the alpine meadows with their delicate little wild-flowers where the shepherds bring their flocks; protecting them in the mountains against marauding armies that traverse the valleys in the brief summers or the wolves and bears that stalk too-close to the ancient misty forests.

There was a great Georgian writer once, Aleksandr Kazbegi – Kagzbegi for Mount Kazbek high upon the spine of the great Caucasus mountain range dividing Russia in the north from Eurasia in the south, which stretches itself like an imposing wall from the Black Sea to the Caspian and through which, upon the Georgian Military Highway, an extraordinary feat of engineering, did the Russians conquer the Caucasus. Kazbegi was a novelist, one of Georgia’s great novelists, who wrote from his heart deep within the mountains filled with the rebellion of the harsh places and the indomitable spirit of those who can make the mountains their home. Silence and thought lending his rebellion depth and meaning and understanding; lending his violence purpose for it was not wanton and vicious but emerging as it did for a rebellion well-considered. It is said that once a hiker from Paris on a sojourn into quiet places seeking respite for his own soul came across an alpine Caucasian valley wherein a simple shepherd watched his flock high upon the roof of the earth, and was stunned by this shepherd’s command of an almost perfect Parisian French. For Kazbegi was also the son of a lesser noble who had studied in Tiflis and also in Russia, and had traveled the length of Europe before retiring for seven years up into the mountains in disgust for what he had seen and with only his pen and his sheep to keep him company – returning to pen “The Patricide”, his final act of immortal revenge.

I like these mountains, as did Kazbegi of old – and though I myself cannot imagine wandering the alpine plains alone for seven years I do see the draw. The cocooning silence, the depth of wisdom walking upon the ancient silken road where before travelers arrived on the way from India or from China or from Persia with their wares to off-load in the ancient port of Batumi or trekking across highlands of Anatolia to Constantinople – that greatest of all cities which has sat astride world history like a colossus forever. And I find comfort in them today, as I’m sure Kazbegi did in his days of resistance, knowing that the more things change in the world outside, the more technology advances convincing men they have somehow improved on the flesh and sinew, the more we forget the ancient fortresses of our past, the more rapid will the nonsense fall away. And watching it fall away, I must say there are worse places than nestled within the memories of the olden mountains that whisper to me of yesteryear and of what is to come after fires purifying return a more natural order to the world and wisdom to her people.

And I know it will be fine, for the mountain tells me so.

Joel D. Hirst is a novelist and a playwright. His most recently released work is "Dreams of the Defeated: A Play in Two Acts" about a political prisoner in a dystopian regime. His novels include "I, Charles, From the Camps" about the life of a young man in the African camps and "Lords of Misrule" about the making and unmaking of a jihadist in the Sahara. "The Lieutenant of San Porfirio" and its sequel "The Burning of San Porfirio" are about the rise and fall of socialist Venezuela (with magic).
View all posts by Joel D. Hirst →
This entry was posted in philosophy, Uncategorized and tagged caucuses, life. Bookmark the permalink.

2 Responses to The Mountains