“What is Covetousness?” asked my little boy

Dinner, a bath, brush teeth, and into bed for a story. Children need structure, they need their rituals – they need to know what comes next; it gives them security. And the bedtime rituals are as old as childhood itself. One can almost imagine Adam and Eve seated beside Cain and Abel in paradise. Maybe they lived in a cave; perhaps it was an adobe hut – or maybe it was a mansion made by the Lord Himself into which he settled the father of our human race and in which the first parents read to the first children from whatever they had, if they had books, or if they did not read instead telling them the creation story fresh though it was and tales of the lions and bears that wandered all around, tucked safely into whatever shelter God had provided those first humans. It is how we pass on wisdom to our offspring product of our experience on this planet and what we have learned from lessons easy but most often difficult.

These days my own ritual with my little boy involves the “Lord of the Rings” series. We’re on the last book, “The Return of the King”. He is intrigued by Gollum, for some reason – “Where is Gollum now?” he asks. LOTR, because it is as good as any story I can think of (and better than most) that teaches about honor, about discipline, about hardship and sacrifice in fighting for what is right and good and true and about what Tolkien himself called the modern “eucatastrophy” – a surprising victory at the end after everything has gone wrong and the darkness seems invincible.

After a few pages, maybe a chapter of LOTR we then switch to the Bible – and a few days ago it was the Ten Commandments. The first laws, like Hammurabi – laws of God written upon the hearts of men and then upon stone when it became clear men are fickle creatures and always scheming. Don’t kill (life is sacred), don’t steal (private property matters), protect the traditional nuclear family (honor your parents and don’t cheat), and don’t lie in court (bear false witness – it’s about rule of law). Then there’s the “covet” laws. “What is covet, daddy?” My boy asked. One of the surprising realizations of parenting comes when our little people force us to articulate what which we have not put to words for a long time. “Hum. You know what jealousy is, envy? Greed?” He looked at me with a blank face. “Ok, lets try this again,” I said. “Does one of your friends ever come to school with something new, that you think is cool?” I asked him. “Yes!” he responded. “Jealousy is about how that makes you feel. If you say to him ‘Oh, that’s so cool!’ and you are interested, that’s great. However, if you see it and it makes you upset and angry – that is jealousy, and greed.” It really is simple, isn’t it? Long after all the political candidates attempt to explain their jealousy in ‘moral’ terms, muddying the waters to make them appear deep, we who have little boys cut through the murk with the clarity and purity of childhood. “Oh, I get it now!” he said – and its settled. 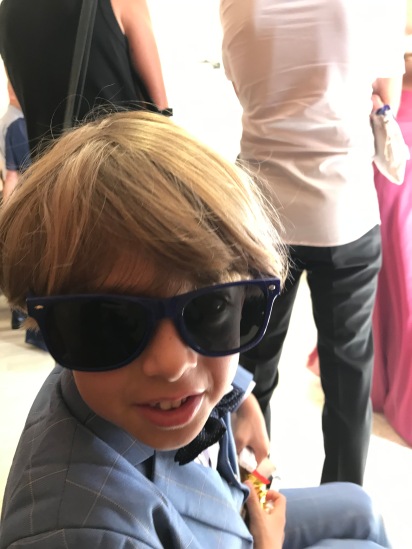 Life, family, law and property. The recipes for a successful civilization explained by a child in only a few words. Maybe the next Democratic debate should be moderated by my little boy…

Joel D. Hirst is a novelist and a playwright. His most recently released work is "Dreams of the Defeated: A Play in Two Acts" about a political prisoner in a dystopian regime. His novels include "I, Charles, From the Camps" about the life of a young man in the African camps and "Lords of Misrule" about the making and unmaking of a jihadist in the Sahara. "The Lieutenant of San Porfirio" and its sequel "The Burning of San Porfirio" are about the rise and fall of socialist Venezuela (with magic).
View all posts by Joel D. Hirst →
This entry was posted in America, Liberty, Uncategorized and tagged faith. Bookmark the permalink.