To Protect Us From Who We Are Becoming

In youth we rebel. We look around at what we instinctively know as good, and we sneer at it – for it is not exciting; it does not speak to us of danger or achievement, mountains conquered or sins at last permissible. This story is as old as Jesus’s parable of the rich man’s son, who squandered his fortune only to learn – after the parties were over and the wickedness left him exhausted – that what he had truly been seeking is what he had known all along. The joyous return; more joyous we are told because of the rotten mulch of evil out of which grows the gratitude and temperance; accompanied by so great a sense of guilt as have those who know they have done great wrong. But why is this, I wonder?

It is not unsophisticated, to love our place in the world; the imagination of what we hold in our consciousness that is kept also in safeguard by the hills and vales in which we nestle protectively our ideas of home. They want to make it seem so – those who tell our young to flee; those whose meaningless lives are played out upon a great stage or an endless ‘feed’; inspiring others to live lives as theirs, lives of no consequence, wicked and banal and endless in their despair. To be sure, the young must find their place in the world; they must sail the storied seas on merchant ships carrying spices to and from distant lands; they must fight in just wars and return with injuries and honor to be placed beneath glass upon shelves of places where their heart always were. They must learn to miss home – to understand its value; to treasure its knolls and valleys and sip quietly the wines of their own land knowing that it is from and to themselves that this product of their sweat and labor will return. But if, in the end, they do not return – that is the real tragedy.

There is something beautiful about literature from the Caucuses. Nodar Dumbadze was born in Soviet Russia and became one of USSR’s great writers; winning among other honors the Lenin Prize. The story is about the love of a man for his friends, his family and his land. About the big city and its excitement, the sly adventures of youth and the warm comfortable embrace of his country girl and his grandma when he knew that the time had come to return to a place that would always be there. This is why we fight for these places, incidentally – for we must protect them from the wicked who see the values and principles of the timeless earth as a threat to their wickedness. For if they succeed, and we have nowhere to return to – if all our places have been charred and our books burned upon the altar of passing prejudices and our legendary tolerance for injustice (today it is called ‘social’, though tomorrow it will be other) – the timeless healing beauty of who we are will no longer protect us from who we are becoming. And that is scary indeed.

“So here I am striding along the meandering path that leads to our village. The earth, the grass and everything around is wet from a recent shower. I myself am drenched to the skin and keep slipping in the mud. The path goes steeply uphill. I hasten my steps, scale the hill almost at a run and suddenly my village opens to view, lying in the valley as in the palm of my hand. My knees give way and I sink on a boulder, a lump in my throat. I sit for a long time, swallowing tears and waiting… At last I see Granny go out of our house. She is more bent than she was last year, but she moves briskly enough. I jump up, grab my weightless suitcase and run downhill shouting at the top of my voice “Gra-a-anny!” Nodar Dumbadze 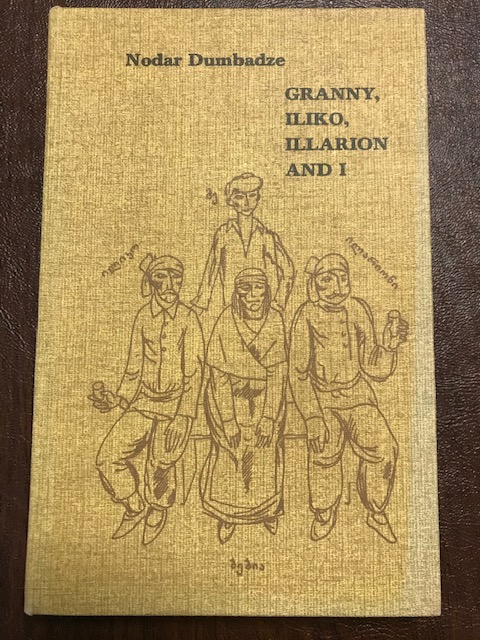 Joel D. Hirst is a novelist and a playwright. His most recently released work is "Dreams of the Defeated: A Play in Two Acts" about a political prisoner in a dystopian regime. His novels include "I, Charles, From the Camps" about the life of a young man in the African camps and "Lords of Misrule" about the making and unmaking of a jihadist in the Sahara. "The Lieutenant of San Porfirio" and its sequel "The Burning of San Porfirio" are about the rise and fall of socialist Venezuela (with magic).
View all posts by Joel D. Hirst →
This entry was posted in Book Review, Literature, Uncategorized and tagged caucuses, Literature. Bookmark the permalink.