They liked to call it the “Revolucion Bonita” – the pretty revolution. It was not going to be a 21st century version of “Cement”, that old soviet realist novel by Feodor Gladkov which was all smelly children and factory floors and crumbling grey homes. Iron smelters, foundries, great smokestacks with thick oily black smoke billowing up into the morning sky – a sign of progress, advancement, of socialist productive success.

Venezuela’s socialist revolution was going to be pretty; environmental. Clean. Quaint. And why not? Funded by oil (most of which was refined elsewhere), couldn’t they lay back, rake in the money and let other countries struggle with industry and business. Couldn’t they turn their country – an Eden of sorts, it really was – into a paradise? “We have been witnesses to the endless deforestation, the deterioration of the land, desertification, the overuse of our fresh water reservoirs, the over-fishing of our seas, the contamination and loss of our biodiversity. The survival of our species hangs on the conscience of humanity,” Hugo Chavez said at the Copenhagen Climate Summit in 2012 – that singular moment, that great achievement of the Bolivarian Alliance where they defeated President Obama, sending the Americans home empty-handed. It didn’t go far enough, they said. Back when their political project had energy – buttressed by idiots at home and abroad – and the animals in their zoos still had flesh on their bones.

There was a sense of mission and urgency to Chavez’s environmentalism; a cultural Marxist vehicle for advancing socialism, consolidating power, destroying enemies and establishing one-party rule. After all, according to him, capitalism had destroyed life on Mars, “Listen! It would not be strange that on Mars there was a civilization; but maybe capitalism and imperialism arrived there and ended life on that planet,” he was fond of saying. If the capitalists destroyed the Martian civilization, well they must be stopped here on earth before they repeat the same. Yes, Chavez was entertaining, back then.

Nobody is laughing now. Drowned out by the incessant, pounding advance of humanitarian catastrophe in Venezuela, it is easy to forget about the animals. That would be cold, right? While 3,000,000 people flee – while children die of hunger – while businesses close and hyperinflation reaches more than 1,000,000% and wealth is eliminated faster than the zeros can crawl across the tops of their bills in that most shameful parade; while the human tragedy unfolds before our eyes, how do we think about the animals? Except, of course, that its not their fault. And let’s be honest, it’s hard to feel totally sorry for Venezuela’s hapless revolutionaries and their equally hapless opposition enablers. Didn’t Chavez and his cronies win more than 15 national votes legitimately, before having to start ballot-stuffing? Isn’t the Venezuelan opposition still talking about elections? Didn’t the commie marchers hurl insults and mockery against our elected leaders; against our installations and embassies and diplomats. Didn’t they and their friends all over USA fill our social media accounts with sewage, call in to our talk shows to insult us, protesting against our sacred parades and belittling our heroes? Didn’t the hemispheric movement of morons march across highways in places where they were certainly not welcome; wasn’t the hubris during the heady days of $150 oil hard to stomach? And now that its over, don’t you – be honest – say, if only to yourself, “I told you so.” Don’t you read to your children the little story of the Red Hen, and as you get to the end and say to your son “If you don’t work, you won’t eat” – aren’t you thinking of Venezuela, sort of smug in the satisfaction that, indeed, the laws of economics are irrefutable, even for those with oil.

I do. Oh, sure, its sad. But its their own damn fault. Do you know what really makes my blood boil? Pictures of Venezuela’s zoo. 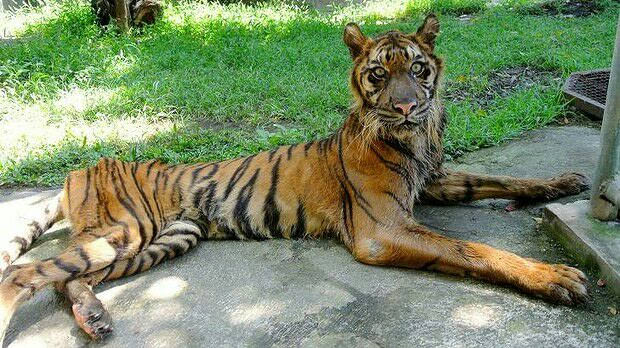 Its bad enough to starve your people – but endangered animals wasting away, eyes clouding over as a great lion or a once-powerful tiger struggle to their feet to limp over to the muddy green pond to take a drink, lapping up the muck, their only sustenance, till they no longer have the strength even for that. Imprisoned unto death while the revolutionary government abdicates its role in their care and the corpulent dictator imbibes fine wines a world away, where the zoo still has visitors and the animals, flesh. A prize stallion, whinnying in terror as the mob steals in at night to slaughter him – noble flesh bred for strength and endurance now adorning the business end of a kebab over a fire set in a rusted garbage can. The botanical garden, once a luxury amidst the hustle and bustle of Caracas, “Dead palm trees and a dried-up lagoon are what you see when you enter Caracas’s botanical garden.” Down in the darkened silent jungles of the “mining belt”, illegal miners are working to strip-mine away the jungles, pouring mercury into the water and slashing ancient primary forests in what some are calling “ecocide” in order to get at the gold and coltan and diamonds under them; to be ferried away to Guyana where they are sold on the black market by soldiers-turned-smugglers.

Venezuelan socialism is in the process of destroying the biodiversity of that once-amazing place. And the aforementioned are what we know about – because of brave people who have gone in to document if only for posterity the socialist disaster. But what about Hato Pinero, that famed jaguar preserve? Have they eaten all the jaguars? Sold their pelts onto the global black market for a few dollars? How are the playful pink river dolphins doing, as the river is overfished by starving peasants who once enthusiastically lifted their fists high at Chavez’s marches? Have the toucans flown away, terrified of being caught and sold for a few pennies or exchanged for a dry maize-patty (nobody has seen butter for years)? Who knows. Environmentalism requires safety – just ask the rangers who fight off poachers in Ngoro-Ngoro or Tsavo. Ask the Coast Guard of Iceland seeking to stop illegal whaling. It requires rule of law. It requires that the authorities exist under the control of a government which itself responds to the consent of the governed. Venezuela is a narco-drug-crime state where everything, including the black pumas, are for sale to the highest bidder.

It is a land without a soul; why should we be surprised it no longer revels in its beauty? An empty belly has no room for such considerations. That, my friends, is communism.

What am I saying here? I’m simply repeating what Indira Gandhi once said, “We do not wish to impoverish the environment any further and yet we cannot for a moment forget the grim poverty of large numbers of people. Are not poverty and need the greatest polluters?” It should not be surprising that socialism, which has a record of wealth-destruction unparalleled even by war and natural disaster, should ravage the natural world upon which it feeds for a season, to be extinguished in an act of violence and sadness – and silence.

Back to Chavez; socialism; capitalism; Mars and “pretty revolutions” which have become ugly and smelly and tragic. Because the truth of the matter is that wealth is the greatest environmentalist. Because wealth allows enough excess runoff (in the form of taxes, and disposable income, and opportunity costs which are not existential) to exist to funnel it into activities which make our surroundings more beautiful. The Saguaro National Park near Tucson; the bison that have returned to wander our prairies; the wolves and bald eagles which are finally off the endangered species list and our great forests which are again expanding. Wealth – product of capitalism – has made that possible in America. And it has allowed us to study and learn about the importance of our environment and its affects in helping us live a “life more abundant”; while Africa and Brazil and China and India – and Venezuela – perpetrate the sixth great extinction.

So don’t be bamboozled by the socialists who tell you it is they who care more about our amazing planet – they are only words, a bait and switch to make a case for their perpetual power; until the poverty (intellectual, financial and moral) of their political project is extinguished among the trees of a great and ancient jungle which is oddly and disturbingly silent, until they too are cut down to make room for a mud hut and a little maize garden.

Joel D. Hirst is a novelist and a playwright. His most recently released work is "Dreams of the Defeated: A Play in Two Acts" about a political prisoner in a dystopian regime. His novels include "I, Charles, From the Camps" about the life of a young man in the African camps and "Lords of Misrule" about the making and unmaking of a jihadist in the Sahara. "The Lieutenant of San Porfirio" and its sequel "The Burning of San Porfirio" are about the rise and fall of socialist Venezuela (with magic).
View all posts by Joel D. Hirst →
This entry was posted in America, Liberty, Uncategorized and tagged environmentalism, Socialism, venezuela. Bookmark the permalink.