“The Same Old Story” is Anything But

The stories of pre-revolutionary Russia are quite remarkable. Saint Petersburg must have been quite a place, indeed, during the days of Russian nobility. 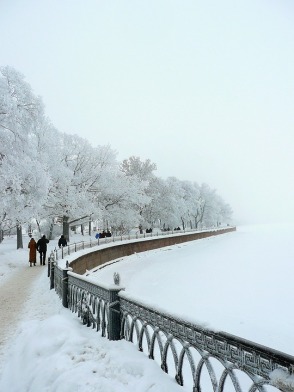 “The Same Old Story” is, but is also nothing but. It is, because it’s a story like so many of the others I’ve been reading lately. Boy moves from village to Saint Petersburg, seeking wealth and love. He then proceeds to make a bit of a fool of himself in the parlor rooms of the wealthy commercent and merchants as he pursues his passions and seeks his fortune. Long discussions far into the night – Saint Petersburg society it appears was lived between 9:00pm and 3:00am. This might make sense in Arabia, where the days are so hot that people save the nighttime for their amorous dalliances and social calls. But Petersburg at 3:00am must have been a hellishly cold place indeed.

From one parlor to another – drinking wine (rarely vodka) and talking about business and Paris and, of course, love. Then moving to another parlor; another host anxious to please, to be surrounded by the finest people of that great old city; writers and painters and industrialists. A girl comes in, quietly, to show herself to the crowd. She is in search of a matching that fits with her position and which will guarantee her future (and that of her family) in a land which is also predatory. She flirts, her eyes lighting upon the right man. Up and coming, with a trust – why is it all people back then had permanent incomes from trusts? – and then slipping away, to await the time-worn dance of courtship.

Letters, anxious and desperate. Uncomfortable supervised discussions in the libraries, sipping tea and speaking of French literature or Italian theater. Chaperoned walks through the gardens under the watchful eyes of the dowagers anxious to not have their precious flower spoiled. In between, angst ridden work, waiting, wondering.

Then it happens – rejection, betrayal. A better matching has come along. Despair, misery.

It is Tolstoy, Dostoevsky, Chernyshevsky – its Goncharov. I keep reading these extraordinary novelists trying to understand what happened. Which brings me to another question. What are the peasants doing while the snowflakes flit from party to party fighting with their hosts for the hand of a girl, a bigger dowry or a cushier job? The answer to these questions are found in soviet literature (from both sides of the issue, Fyodor Vasilievich Gladkov, Aleksandr Solzhenitsyn, Ayn Rand – books full of spit and fight and suffering); just like the answers to the aristocratic governance model were found in the revolution.

At any rate, though Ivan Goncharov thought his novel was “The Same Old Story”, for those of us who have come after – 150 years after – it is nothing but. I highly recommend this amazing Russian classic.

Joel D. Hirst is a novelist and a playwright. His most recently released work is "Dreams of the Defeated: A Play in Two Acts" about a political prisoner in a dystopian regime. His novels include "I, Charles, From the Camps" about the life of a young man in the African camps and "Lords of Misrule" about the making and unmaking of a jihadist in the Sahara. "The Lieutenant of San Porfirio" and its sequel "The Burning of San Porfirio" are about the rise and fall of socialist Venezuela (with magic).
View all posts by Joel D. Hirst →
This entry was posted in Book Review, Literature and tagged Russia. Bookmark the permalink.