Our Society of Dead Poets

We pass on how to live in our genes. Our bodies telling us when we are hungry in order to eat, when we are tired to sleep. The myriad urges of animal life – when to purge our accumulated waste, when to procreate. Seeking warmth, shelter in a cave, companionship – tenderness. Mothers instinctively feed their babies; father’s respond with violence to predatory threats from just over the horizon.

But why to live? That, it seems, each successive generation must discover for itself – and it’s a messy process which would appear to be incompatible with the peace that we all seek. Peace, or meaning. I often wonder if those are the two life-forces destined to be constantly in conflict. I am not the first to wonder this, because as part of our experience in living we developed writing. This greatest technology (perhaps second only to fire), in order to pass down what we learn in our old age to those who come after in the desperate and vain hope that they will not have to follow the same rocky paths. The ones they invariably do anyways.

I am an honorary member of the ‘Dead Poets Society’. Dead white men – is what they are branded these days by the know-nothings desperate to never crack open a book. Believing, as I suppose they do, that meaning enough can be found from the juices excreted from their glands or the pangs of human urges. The blood that runs through their veins – scary. But the dead poets? Who cares, they must have been vile; how could they not be, product of our wicked past? Of course, its important to note that they are not all white, nor are they all men; wisdom knows no pigment or chromosome. Chinua Achebe and Ahmadou Kourouma – Homer (indeed, Homer was probably brown). Emilie Dickenson and Pearl S. Buck. They do have to be dead though – yes that rule is incontrovertible. Living people tend to disillusion. When they’re gone you know at least that they can never weigh in on the daily news thread, an act by which they will invariably disappoint someone and crash to earth, their soaring comet converted instantaneously to just another ‘fascist’ or ‘neo-con’ or ‘racist’ to be rapidly discarded. The society; I am an honorary member. Member, because it is a self-selecting group. We are members who choose to write down our short experiences upon this old planet in the hopes that somebody will pick them up one day and avoid for themselves some trouble. Honorary, which literally means ‘conferred as an honor, without the usual requirements or functions’ – because one of the requirements of membership is to be dead, and I do not meet that requirement. Yet.

Dead Poet’s Society – too many of you won’t know I’m referring to a movie. About an English professor, played by the great Robin Williams (may he find in death the peace he never did in life), and his attempt to inspire meaning in his gang of motley boarding-school charges. ‘Pop culture’, maybe – at least back then, when I was young. But it did abide, mostly because it was about dead poets, Wordsworth and Keats and Kipling – and of course Robin Williams, who has now joined them and become a full-fledged member of the society that he did not found (though certainly named) by meeting that most lasting of requirements.

I have a ritual with my little boy. We run around. OK, I know, not particularly inventive; but pure little boy joy. We stream YouTube play lists as we chase each other. “Beat music, daddy” he says. Simon and Garfunkel be damned. As the technology selects the next song, I often find myself guiltily enjoying some of the cotton-candy music of the moment, and in this process I came across Avicii (only to learn belatedly of his fate). In the listening, I discovered one song about a father’s advice to his son. “One day my father he told me ‘son, don’t let it slip away.’ He took me in his arms, I heard him say ‘when you get older your wild heart will live for younger days. Think of me if ever you’re afraid.’ He said, ‘one day you’ll leave this world behind, so live a life you will remember…’”

Meaning? Live a life you will remember. Forgetting if you’re dead, ostensibly you will not remember anything – unless you believe in what comes next, but this is not a song about religion. Millenials don’t really do ‘faith’; that is mostly for dead white people – the foremost of who is Jesus, who probably was not white either but the same toasted hue as Homer. “A life you can remember”, I suppose it’s as good advice as any, though if we were to go by the music video it would appear that ‘remembering’ involved mostly jumping off of things (buildings, bridges, etc.). “Where are we going?” the next song by the same musician inquires. “Somewhere we belong,” is the answer. Meaning; remembering, belonging? But where do we belong, if we’re dead? Especially if we don’t believe in dead not-so-white men? I learned with one quick google that Avicii had killed himself a week prior with the shards of a wine bottle he’d emptied. Meaning; remembering, belonging? Seems that this tragic boy lost the plot; proving again what we already knew, fame and fortune at least aren’t the answers. Will he join the society of dead poets now, as Robin Williams did – victim to the self-same demons? Maybe – but as the wrong type of lesson, a lesson I will teach my little boy when the time comes.

But “Think of me whenever you’re afraid.” That piece of advice at least is wise and was, as always happens with wise advice, ignored. Upon the narrow tortured path of life, this young man slipped off a ledge. The saddest thing in the world. What is my point on this Memorial Day morning? Memorial Day, when we remember those whose lives were cut short in the defense of our grand experiment, the greatest dead poet’s society in human history. Maybe, “Live a life that others will remember”. Yes, I’m almost certain that’s it. Dead poets and historians and philosophers and theologians – our great poet founders led as they were by the greatest poet of all, a Jewish man from Nazareth. Now THERE is a life that was remembered! 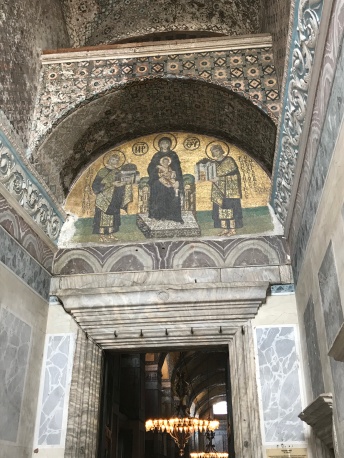 The Dead Poet’s Society (we could say our ‘great cloud of witnesses) – having written down what they learned so many years in the past, we are encouraged to “Think of them, whenever we’re afraid.” Wise advice – which we should heed, lest we too slip and tumble.

Joel D. Hirst is a novelist and a playwright. His most recently released work is "Dreams of the Defeated: A Play in Two Acts" about a political prisoner in a dystopian regime. His novels include "I, Charles, From the Camps" about the life of a young man in the African camps and "Lords of Misrule" about the making and unmaking of a jihadist in the Sahara. "The Lieutenant of San Porfirio" and its sequel "The Burning of San Porfirio" are about the rise and fall of socialist Venezuela (with magic).
View all posts by Joel D. Hirst →
This entry was posted in America, Honor, Liberty, Poetry, Uncategorized and tagged faith, Meaning, philosophy, Poetry. Bookmark the permalink.