Every morning, here in West Africa, as I prepare my little boy for his school – the gym and the recess and the library, PE and science class and field trips – I look through the window of my kitchen out over the manicured lawns, the play ground and the swimming pool and through the concertina wire to the Africa outside Elysium. There too, in the shadow of privilege, a little one-room school house has sprung up, built in a park that was quietly seized one night by the entrepreneurial homeless, a homestead in which no government official will interfere. Upon broken down benches and with no electricity, writing in pencil upon cracked paper, sharing aging yellowed books, West Africa’s urban poor hope for a better future which is, quite literally, just over the wall. 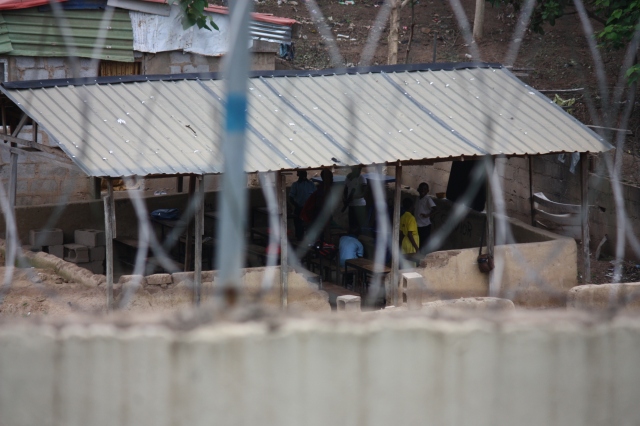 Privilege and inequality, those are the words of the 21st century world. We in America take great pride in our world of mobility, where – as the story goes – it doesn’t matter who you were born, its your hard work, savvy and street smarts, your grit, which will determine how far you go. There are no elites, no aristocracy, just businesspeople and politicians – just winners and losers. But is that really the case? Or has our world changed? Are we more like West Africa than we care to admit? In his seminal article “The 9.9% is the New American Aristocracy” Matthew Stewart describes the rise of America’s new nobility. Aristocracy, you probably frown – we are careful to hold closely to accepted parlance, using the word meritocracy as a salve with which we soothe our aching knuckles after beating back those who try desperately to overtake us. “The meritocratic class has mastered the old trick of consolidating wealth and passing privilege along at the expense of other people’s children. We are not innocent bystanders to the growing concentration of wealth in our time. We are the principal accomplices in a process that is slowly strangling the economy, destabilizing American politics, and eroding democracy.”

The 9.9% are the managers. The elites. The swamp, if you are less generous. They are people like Darel E. Paul who writes in Quillette of “A Managerial Ideology”, “Managerialism (…) is a coherent and complex account of society with a program for creating social order. Not surprisingly, it places the manager at the center of that order and assigns her the key role in producing it.” The intent of the managers is to carefully supervise the creation of a, “society in which every individual has an equal chance to develop and realize his merit and be rewarded by society for it. This is a process of individual transformation and empowerment. Networking and mentoring programs build personal skills toward increasing personal value, self-affirmation, and self-realization.” They see society – from everything like real estate, banking, education, health care and the food industry all the way through government – as a series of interlocking organizations to be managed using the best practices of Harvard Business School. Managed by them, specially credentialed with degrees from the right universities and membership to the right clubs and affiliation with the right candidates – and of course control over the right institutions which make the right regulations – they can assure no upward seepage of the non-9.9% which will challenge their reigning wisdom.

And in the process of their acts of benevolent management, they created a new caste, a new aristocracy, being careful to “Pull up the ladders behind them as they ascended,” as Angus Deaton eloquently explains. “They have taken their money out of productive activities and put it into walls,” says Stewart. This is no surprise, the history of aristocracy has always been one of exclusion, of privilege protection through systems as complicated and bizarre as the right of first night or hazing rituals at the elites’ managerial universities. Self-serving, self-dealing, and as the expert managers of society using their elite friends in media and entertainment to make the case for the indispensable nature of their class.

The only problem, of course, is that they have failed. Inter-Generational Elasticity (IGE – how much better off your children will be than you are) in America is the worst in the developed world. And as Stewart says, “Rising immobility and rising inequality aren’t like two pieces of driftwood that happen to have shown up on the beach at the same time, he noted. They wash up together on every shore. Across countries, the higher the inequality, the higher the IGE. It’s as if human societies have a natural tendency to separate, and then, once the classes are far enough apart, to crystallize.” The process of the American aristocracy’s crystallization is well advanced.

Not only have they failed, as if that were not bad enough, but it turns out people do not like to be managed. There’s something plucky and rebellious about America that we get from our rocky mountains and our hard winters and our wide-open spaces, our sense of the indomitable that eschews supervision. How does this rebelliousness manifest itself? Among other things, it comes raging forward in the rise of reactionary, some might say emancipatory politics. Donald Trump and Bernie Sanders, to not put too fine a point on it.

Of course, the managers are fighting back as their work is dismantled and their entire raison d’etre is brought into question. Cue the elite temper tantrum over the last 18 months. When the flight 93 passengers who have stormed the cockpit talk about “draining the swamp”, throwing the pilots out of the window in order to desperately try and avoid the rapidly approaching mountain, this is what they are talking about. And America does have a weird and unique way of righting the listing ship – our titanic has not yet hit the proverbial iceberg. Who will win? Will the managers re-exert their steady but smothering influence as we become more and more like West Africa, or will the rowdy and raucous win the day, overthrowing the managers and creating an explosion of prosperity? Stay tuned, I guess.

It is quiet now, and my son is in his nice clean classroom with his electricity and his new books and his air conditioning and his science experiments as I listen outside to West Africa’s child poor in play. They are the real losers in an overly-managed world; for the managerialism which is destroying  prosperity in America does not stop at our shores. We are imperial in every way that matters. And as such in many ways, in all the ways that count in fact, we have exerted our imperial weight in the farthest, darkest corners of our world – in systems of subjugation which at home are hard enough to fight; but what about for Africa’s poor? Do the little children who laugh and chase know yet that the odds are stacked against them? And, I ask you – who probably anger and seethe at your own perceived injustices, whether you are a manager, or the managed – do you even considered them as you think of the human struggle for prosperity? As for me, I do. Because, in more ways than you probably know, our fates and those of Africa’s poor are closely intertwined.

“We gaze upon the 0.1 percent with a mixture of awe, envy, and eagerness to obey. As a consequence, we are missing the other big story of our time. We have left the 90 percent in the dust—and we’ve been quietly tossing down roadblocks behind us to make sure that they never catch up.”

Joel D. Hirst is a novelist and a playwright. His most recently released work is "Dreams of the Defeated: A Play in Two Acts" about a political prisoner in a dystopian regime. His novels include "I, Charles, From the Camps" about the life of a young man in the African camps and "Lords of Misrule" about the making and unmaking of a jihadist in the Sahara. "The Lieutenant of San Porfirio" and its sequel "The Burning of San Porfirio" are about the rise and fall of socialist Venezuela (with magic).
View all posts by Joel D. Hirst →
This entry was posted in America, Liberty, Uncategorized and tagged capitalism, managerialism, politics. Bookmark the permalink.