The Harmattan billows above blotting out the sun, dust coalescing with diluted traces of the acrid garbage fires that warm the ditch beyond the potholed road and the wood smoke from the last trees of the plains burned to cook beans and rice and the occasional dried fish from desiccated and barren lakes. A black plastic bag escapes the flames, parasailing the harsh winds over the ten foot wall crowned with concertina wire to lodge itself on a carefully pruned pine tree. I walk the compound pulling my dog on her leash, imported beer in hand brewed in a place cold and clean and shipped in to be sold for more than the value of a day’s labor. Back and forth and back again in a restless, trying parade. She was a gift to my wife, my dog was, a tiny pretentious little thing, a historical memento from days when European nobles bred ornaments, not animals and when we looked into the future, not the past for the ideas of the “west”.

Outside the compound, gazing through the bullet-proof glass they sit, though we don’t know who they are. Young men, squatting in the dust or selling phone cards and mystery meat, eyes squinting through the grimness, that wary look of both predator and prey; watching, waiting, but for what? Who knows… We fear them, and we build our walls. This is Kabul; and Mogadishu. It is Bamako, Dakar and Abidjan. Accra and Abuja and Dhaka; Caracas and Lima and even these days parts of Phoenix and Chicago and Washington DC. Paris outside the ring; Molenbeek or Schaerbeek in Brussels. “I saw similar young men everywhere – hordes of them. They were like loose molecules in a very unstable social fluid, a fluid that was clearly on the verge of igniting…” Robert Kaplan evocatively writes. 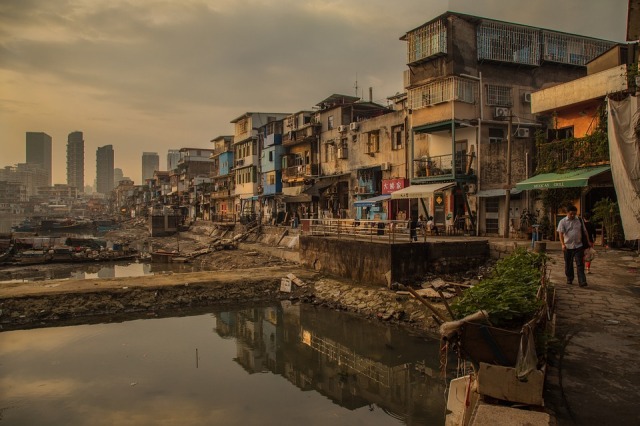 Twenty-five years, that’s how long ago Kaplan warned us of ‘The Coming Anarchy’. Not that we listened – hubris, which is something we are good at in the West. And why not? We won, the commies were crawling back into their holes; walls were falling down – a “New World Order” was upon us. It was “The End of History”, said Fukuyama. Except that it wasn’t. “While a minority of the human population will be, as Francis Fukuyama would put it, sufficiently sheltered so as to enter a ‘post-historical’ realm, living in cities and suburbs in which the environment has been mastered and ethnic animosities have been quelled by bourgeois prosperity, an increasingly large number of people will be stuck in history, living in shantytowns where attempts to rise above poverty, cultural dysfunction, and ethnic strife will be doomed by a lack of water to drink, soil to till, and space to survive in.”

Occasionally in West Africa, in Latin America I encounter somebody from the days before the anarchy. “I once went from Marrakesh to Timbuktu on a camel,” somebody told me. “I rode from Johannesburg to Cairo through Gulu and Juba on a matatu,” said another. “I hitchhiked from Lima to Bogota, then all the way to the Darien Gap.” Days when our ideas reigned supreme and we only had to wait till democracy and law met free markets empowered through education in an upward spiral to universal prosperity. But we don’t take warnings well – like the ones given to us by Kaplan while I was still in High School; before the anarchy came.

I have taken to watching apocalyptic, dystopian movies these days on Netflix. Some about alien invasions; others about the end of the world. “The 100” and “I Am Legend” – most recently it was “Elysium”; where the elites moved off-world, building a pristine station orbiting the overcrowded and degraded world; poor and violent and diseased. But “Elysium” is not science fiction, I know because I have lived there – though they are not orbiting the world. In Caracas, in Goma, in Kampala, in Islamabad they sit; hidden behind walls and concertina wire, broadband internet and bars and sparkling swimming pools while outside little girls walk for hours to fill their yellow jerry cans from the drying river or simply siphon off the cleaner looking water from the puddles that collect after a rainstorm.

Fragility and conflict. Those were the words for the post-cold war period, which is now over. Not democracy, not human rights or ‘world order’ – as we had hoped. It was in fact a world disorder we inherited, we who came after and which we have bequeathed to our own children. “During the 1960s, as is now clear, America began a slow but unmistakable process of transformation. The signs hardly need belaboring: racial polarity, educational dysfunction, social fragmentation of many and various kinds.”

But what comes now?

“Europe, at least in the way that we have known it, has begun to vanish. And with it, the West itself…” Again Robert Kaplan writes – bookending the post-cold war period he started, with another opus, ‘The Return of Marco Polo’s World’. “For a long time Europe was lucky in this regard: It could reject power politics and preach human rights precisely because tens of millions of Muslims nearby were being denied human rights, and with them the freedom of movement. But those Muslim prison-states have all but collapsed (either on their own or by outside interference), unleashing a tide of refugees into debt-ridden and economically stagnant European societies. Europe now fractures from within as reactionary populism becomes a relevant dynamic, and new borders go up throughout the continent to prevent the movement of Muslim refugees from one country to another. Meanwhile, Europe dissolves from without, as it is reunited with the destiny of Afro-Eurasia as a whole.”

We had twenty five years to avert the arriving ordeal. A quarter century; not very long, to be sure – but perhaps two generations. Yet we dallied. Europe and increasingly America (who tends to follow Europe despite Jefferson’s best advice) became ‘social democracies’, a soothing term meant to provide succor to people exhausted by two world wars – a welfare state sucking the oxygen out of the workers and their revolutions to stop the advance of ‘Underground Europe’. In the end she became bloated and bored; ever-mounting piles of debt justified by enthroned prophets telling the elites just what they wanted to hear. America too – and Japan.

The future belongs now not to the inhabitants of Elysium; but to the predators who roam the ungoverned spaces beyond. To join criminal networks, jihadi groups – to ride the perilous waters. To cross the barren deserts. Demographics – the fact that West Africa’s populations are doubling every fifteen years. Climate change? A word for parlor houses in Davos, not for the fishermen on Lake Chad where they think less of ‘carbon taxes’ and more about how far their daughters must walk over thug-infested hills to cut another tree for firewood to cook the fish they can no longer find in the barrenness of a once-great lake that has become empty.

What will the future generations do with the world we are giving them? Will they hijack the shuttle and storm Elysium – ravaging her out of rage and impotence (like they have done in Venezuela)? Will they once and for all reject the ideas that defined our years, our parents’ years? “Of course, the West as a civilizational concept has been in crisis for quite some time. The very obvious fact that courses in Western civilization are increasingly rare and controversial on most college campuses in the United States indicates the effect of multiculturalism in a world of intensified cosmopolitan interactions.” And as the West fades into history, like Rome or Greece did into the Dark Ages – preserved in that most perfect image of a priest reciting a dead language to the vacant stares of peasants starving and sick – I ask myself ‘What will the arriving ordeal look like for the world of my son, and grandson?” This will be the great discussion of the 21st Century.

Joel D. Hirst is a novelist and a playwright. His most recently released work is "Dreams of the Defeated: A Play in Two Acts" about a political prisoner in a dystopian regime. His novels include "I, Charles, From the Camps" about the life of a young man in the African camps and "Lords of Misrule" about the making and unmaking of a jihadist in the Sahara. "The Lieutenant of San Porfirio" and its sequel "The Burning of San Porfirio" are about the rise and fall of socialist Venezuela (with magic).
View all posts by Joel D. Hirst →
This entry was posted in America, International Affairs, Uncategorized and tagged poverty. Bookmark the permalink.

47 Responses to The Arriving Ordeal