“Dreaming in Cuban” A Book Review

Americans love antique shops. In the mountain villages above Colorado Springs or the tiny towns of the Blue Ridge in West Virginia people – tourists all – rifle through the clutter in hopes of finding that prize. I have known of people who purchase every old painting they can find, in order to rip open the back as they seek to discover a hidden copy of the Declaration of Independence or the Constitution. We love these things because they are old, have survived the test of time, and because they remind us of the past when things were simpler or had greater integrity.

In Cuba, the entire country is an antique shop. Daily life struggling to keep the ancient cars starting, the fifty-year-old refrigerators operational, the gramophones still reading the LPs. The ideas too are old – polished and shiny through overuse. A museum of the mind.

Turns out living in an antique shop is hard, a chore.

We sometimes forget that the story of the Cuban dictatorship is also the story about individual people; nuclear families. The struggles of people to find meaning up against the colorlessness of tyranny. “The greatest tragedy of Cuba’s dictatorship,” I have heard it said, “is the theft of six generations of life.” To be sure, this is true. But without adversity, is it ever possible to develop character? We who try and write are told that, without conflict, there is no story. If that is the case, the Cuban tragedy is indeed an epic story. Great conflict, the struggle to be free against the attempts to stifle the individualism of a nation. But not only of these mammoth conflicts is a good story made. Because the Cuban story is also about the millions of micro-conflicts, individual struggles of an entire country of citizens. Those who flee, those who remain. Those who love, those who divorce or cheat – who starve or go crazy, who die. 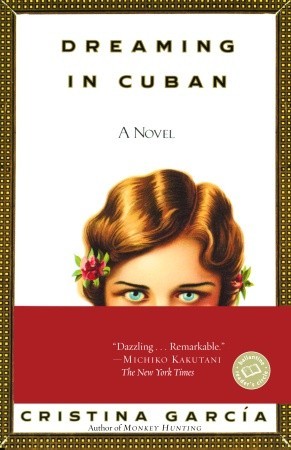 How can you capture both of these realities, to make a story not only a one-dimensional presentation of the hardship of life under dictatorship but also the richness of lives lived as best as they were able? That was the challenge for Cristina Garcia in her debut novel “Dreaming in Cuban”. And she does it well. It is the story of three generations of a Cuban family, from before and then during the ‘revolution’. There is no after – the story of a free Cuba is still being written.

I found this short novel extremely powerful. The sadness of lost opportunity; the flight to foreign countries; the search for meaning in art or school or even Santeria, that uniquely Cuban form of witchcraft. Sex, love, lust. Betrayal. Sadness and death. As Cristina walks us through the lives of her characters we come to know them and to feel with them – and in doing so we share with them their struggles and we come to ourselves better understand the sadness and desperation of Cuba’s endless nightmare.

For those who want to understand Cuba better, read this book. You will be glad you did.

Joel D. Hirst is a novelist and a playwright. His most recently released work is "Dreams of the Defeated: A Play in Two Acts" about a political prisoner in a dystopian regime. His novels include "I, Charles, From the Camps" about the life of a young man in the African camps and "Lords of Misrule" about the making and unmaking of a jihadist in the Sahara. "The Lieutenant of San Porfirio" and its sequel "The Burning of San Porfirio" are about the rise and fall of socialist Venezuela (with magic).
View all posts by Joel D. Hirst →
This entry was posted in Book Review, Literature, Uncategorized and tagged Fiction. Bookmark the permalink.