Remember that last scene in the 2nd Hunger Games book when Katniss shot the arrow and the dome exploded to allow in the extraction team to rescue the gamers? Meanwhile the whole thing was live-broadcast as the Capitol’s residents – resplendent in their weird costumes attending their odd-behaving events and drinking their colorful drinks – watched in horror, before they let their glasses fall to the floor and their feathers fall limp? 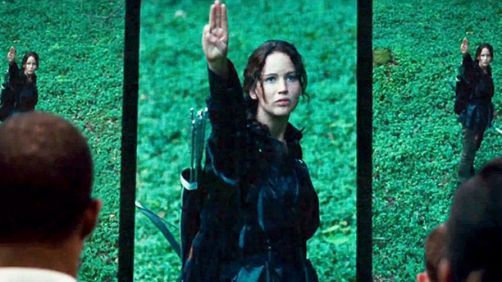 They say politics follows art. That President Obama couldn’t have been elected without David Palmer on the television season 24; which mainstreamed the idea of the cool, collected African American president. Madam Secretary was I suppose for Hillary – and a lot of folks have been attributing the incoming Trump administration to “The Apprentice”.

I first read book one of the Hunger Games while on vacation in Marrakech. It did sort of strike me as a representation of where globalism has taken us. Not globalization – many people mix these up; as they confound crony capitalism with the free markets. But globalism. A group of “global citizens” not beholden to rolling hills and fertile plains – or the beaches, jungles and snowcapped mountains – the lands that birthed them and the ideas that were passed to them from their elders; but instead to a “new world order”. A big Capitol narrative where people are more likely to drink with somebody from Dubai then from Des Moines. Where they vacation together in chalets in Austria and not Rocky Mountain cabins. Where they don’t know how electricity is generated or where sewage goes to be processed but are experts in the regulations governing World Bank loans.

No time for the flyover states with their deplorables always clinging to things. Well the districts have risen up, haven’t they? Tired of growing the food that the Capitol eats – generating the energy they consume and cleaning out their septic tanks – all the while being degraded as racists, ignorants, residents of “dumbfuckistan” as I saw recently on Facebook; called stupid because they don’t spout nonsense derived from a Women’s Studies class on the east coast. They said “No More”, the deplorables did.

Well the elites are in a tizzy; aren’t they? I’ve never seen anything like it – much less imagined it. Inconsolable. Apoplectic. Frenzied.

Remember the scenes of the Capitol? The polished skyscrapers; great ballrooms shimmering with rainbow pastries? People dressed in exotic outfits outmatching each other with their avarice for the exotic. What happened when the districts rose up? Total war; torture; bloodlust. The threats to their continuity – their valueless values – were not to be accepted. Now – a wise observer would remind me of the end of the story (spoiler alert) when the rebellion also turns despotic. Freedom is not easily preserved, is it? And no, I’m not trying to draw comparisons to everything – its allegorical after all; nevertheless oh so prescient. Because now we must think – our future depends upon it. Gone are the days where safe spaces can protect prejudice from challenge; or when an uncommon sense ruled.

The Capitol still has time to pull themselves back from their embarrassing foolishness. And the rebellion can find a way to smooth over a transition that benefits all while also rebalancing things. Adds some reason – at least – lest the conflict degenerate for wont of minds. I, myself am somewhat encouraged and with a newfound hope. I have many friends both in the Capitol and in the districts. And I enjoy them all – although I agree with some less than others. I have been afforded by fate or providence a perch in both of the Hunger Games cages – the gilded one and the one guarded by peacekeepers; and I suppose I don’t consider myself a resident of either. I’d like to think that this makes me more sensitive and perhaps even discerning; though I be called “dumbass” more times than I care to recall.

So the advice of this dumbass?

What if we were to respect each other – and learn from this? Or – better yet – I challenge you; search on Facebook for somebody sporting a Make America Great Again (#MAGA) or a #WithHer poster and message them. Kindly congratulate them for their win or lament with them their loss and begin a gentle dialogue. If they insult you, apologize for the intrusion and try again with somebody else. Until new friendships are born and walls are thrown down. Wouldn’t that be an amazing movement? So much better – and more effective than the #NotMyPresident temper tantrum; which, let’s be honest, is what the other 50% would have said if she had won.

Joel D. Hirst is a novelist and a playwright. His most recently released work is "Dreams of the Defeated: A Play in Two Acts" about a political prisoner in a dystopian regime. His novels include "I, Charles, From the Camps" about the life of a young man in the African camps and "Lords of Misrule" about the making and unmaking of a jihadist in the Sahara. "The Lieutenant of San Porfirio" and its sequel "The Burning of San Porfirio" are about the rise and fall of socialist Venezuela (with magic).
View all posts by Joel D. Hirst →
This entry was posted in Honor, Liberty, Uncategorized and tagged politics. Bookmark the permalink.