It Is All Now Part of America

There are places which are old – infused with history and time and tradition until they stand alone, boldly buttressing the story of mankind. Those of us who have lived in the East, who like to talk about Mount Vernon, Monticello and Jamestown forget that these are not the first tales told in our Americas. I’m talking again about the Spanish. I, who was raised in South America, have become accustomed to the omnipresent influence of those rough old conquistadors in daily life: from the patterned layout of the cities and villages to the constipated legal code; from the elegant language to the rigid religion. A new race even, obliterating old peoples – first peoples – to forge something original. What we forget, those of us from here but who grew up there, is that the Spaniards also made themselves known in America. Arizona, New Mexico, California and Texas – huge pieces of an old Spanish empire that died. But her remains do abide.

Yesterday I visited San Xavier Mission south of Tucson. As you drive south towards Nogales, a white pearl begins to glisten in the desert. The surroundings are stark, barren and hostile – now a reservation of the First Peoples who both predated and outlasted the Spaniards. I can’t help but wonder what the ancestors of these Indians thought of those odd men who showed up one day. Mounted on horses, they were probably wearing brown robes – they were Franciscans after all – and they also most likely had beards and were adorned with crosses. They brought books with them, great leather-bound tomes from which they read reverently. 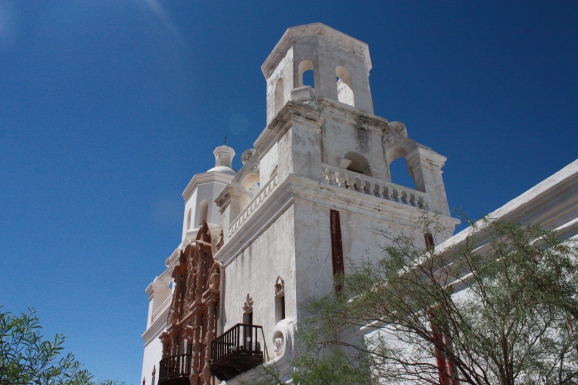 They erected a building, San Xavier Mission – honoring one of their saints – and began teaching. It must have shone majestically in the sun, whitewashed and elegant; seen from miles around. Unlike anything the Indians had ever seen before; a symbol of heaven kneeling in the sand. The inside must have awed the Indians, bright blue and glistening gold and fiery red – great murals, epic paintings and huge ornate statues. The physical representation of a new religion, a better religion – so they were told.

Which brings me also to ponder, what must the Spaniards have thought? They were from Cadiz, Cordoba, Almeria and Malaga. All places I have been – unchanged by time. The smell of the open ocean – the Mediterranean, glistening blue and old, a great friend of the Spaniards who had lived their lives defined by those waters for generations – forever. The aroma of oil-soaked calamari fried in the open, the sharp cheeses, the bouquet of wine and the tang of the prosciutto had all been replaced by a desert as barren as I imagine they found the souls to which they were tasked to minister. Cactus, mountains, snakes and spiders and vultures. Hostile – as hostile as the constant raids that they somehow survived.

And after it all, here it is. San Xavier Mission, sitting beside a superhighway built by a new, aggressive people – who pushed far and deep from their tiny enclaves on the north-eastern coast. The Spaniards have gone, we have arrived, and the First People’s are still there. They do abide, those whose land it was first – before others, before us. But there is no bitterness – history moves about in waves and leaves no room for resentment.

I am at ease in San Xavier. It is after all Arizona, and I am from here too. My memories are infused by the desert, the heat – the barrenness and the danger of the harsh open spaces. Maybe that is why I get so claustrophobic at the thought of the dirty cities and rude people back east. Maybe that is why I have always looked west. Yet San Xavier is also the ‘South’ – Spanish America, language and religion and culture meeting in that one indomitable Embassy of the Church – the Mission. I know those things too – because they are a part of who I am as well – raised among a people who, separated by a thousand miles are nevertheless the same.

And it is all now a part of America – Indian and Spaniard – Catholic and Evangelical – Spanish and English. The past and the future; all rolled up into our epic saga. I go to the Mission as often as I can – the prayers of spiritual men always infuse a place with echoes of introspection, which nourishes a tired soul.

I hope you go there too, when you are next in Arizona. To commune with old and new, foreign and familiar under our expansive, welcoming skies.

Joel D. Hirst is a novelist and a playwright. His most recently released work is "Dreams of the Defeated: A Play in Two Acts" about a political prisoner in a dystopian regime. His novels include "I, Charles, From the Camps" about the life of a young man in the African camps and "Lords of Misrule" about the making and unmaking of a jihadist in the Sahara. "The Lieutenant of San Porfirio" and its sequel "The Burning of San Porfirio" are about the rise and fall of socialist Venezuela (with magic).
View all posts by Joel D. Hirst →
This entry was posted in Travel, Uncategorized and tagged America, arizona, Freedom. Bookmark the permalink.

4 Responses to It Is All Now Part of America