Arizona: That Too Is Fitting

An Indian sits in a wheelchair on the porch of the abandoned community center, watching the sun set over Yuma. First Peoples, that’s better – has more romance and a greater sense of nostalgia than Indian, doesn’t it? Not because the latter is politically incorrect – but just simply incorrect. A 500 year old mistake by a European – and a civilization vanished. First Peoples, here, in the last place. Yuma certainly feels like the last place in America. At the end of Arizona; before Mexico. Before California starts – something exciting and powerful and popular calls out from beyond the barrenness. It is known for a prison – and now a movie about a prison.

So many have nowhere to go – the First Peoples at the end; gazing out patiently toward the shimmering sun, lost in the memory of when things were grand, wondering if they will be again. 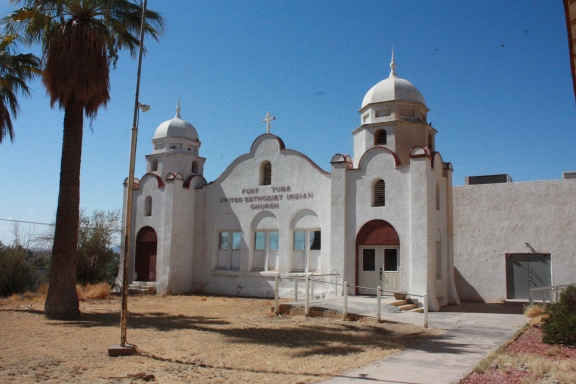 Credit – Me, From The Heat

The heat is like a blanket, stifling and heavy. On the horizon the white dunes are a haze dividing sky from desert; stories-high and flowing gently, harmoniously. Luxuriantly, like silk. They look soft – dunes do – wherever you are in the world. The great dunes that perch ominously on the edge of Timbuktu, for 700 years threatening to swallow that fabled town. Dubai, squatting in all its plastic-and-glass-glittering-glory upon monumental Arabian sand mountains. The Medanos de Coro of Venezuela where if you linger the wind will drive you mad as you are visited by spirits of the past.

I drive on – very little to see here, the old jail and railroad; a few old hotels boarded up, ghosts of women wronged still peeking out from behind musty curtains.

A young Mexican boy complains as he rushes about in his family business. El Centro is the town’s name – the center of, nowhere. “There is nothing here,” he states without bitterness, handing out bowls of beans and burritos to border patrol agents and HVAC contractors. “I wish I were somewhere, anywhere else.” El Centro is not the west. The ‘west’ ended at a prison in Yuma. Not ironic, just interesting. This is – well the middle – right in the middle in fact, halfway between Yuma, the last place, and San Diego – the next place. The future. Million dollar homes; highways and pretentious Californians at La Jolla beach, dyed hair and tattoos; easily offended. Soft people, but good people. Only 150 miles – they might as well be light years, for that boy; and for the Indian man too, staring out over a dying town.

I’ve been driving to stretch my legs – to see spread out before me unoccupied land where the animals still roam. The world has become claustrophobic, stifling; limited by our paranoia and our enemies’ great evil. I travel without a phone, without internet, without whatever the hell ‘Pokemon Go’ is – zombies wandering aimlessly through the dunes, almost stepping on a roadrunner as they look for – well I have no idea really, and I have no energy to try and find out. I drive without that little voice that has replaced our conscience, ‘turn left at the next crossing, continue on interstate eight for one-hundred-miles’. Fear. Fear at being lost, fear at missing something. More probably fear of finding something. Fear of being alone with our thoughts and our families.

Back in the west, a kindly policeman wanders aimlessly through a Shell Station. Drinking Coca-Cola and killing the time. Not bitter or angry, or even bored really. Good men – reassuring men, men there to ensure that the pervading order which has allowed us to thrive is maintained. Disorder – chaos – unpredictability; these are no lovers of prosperity. My little boy runs up, having grabbed a pamphlet from the display. “A-R-I-Z-O-N-A he reads to me – beaming. Mama, mama,” he runs off looking for her, “I can read!” The policeman smiles gently – we are under his protection, and western sheriffs embrace this trust with pride. It is fitting my son can read, this of all words. Arizona – he will be a child of the sands. And that too is fitting.

Joel D. Hirst is a novelist and a playwright. His most recently released work is "Dreams of the Defeated: A Play in Two Acts" about a political prisoner in a dystopian regime. His novels include "I, Charles, From the Camps" about the life of a young man in the African camps and "Lords of Misrule" about the making and unmaking of a jihadist in the Sahara. "The Lieutenant of San Porfirio" and its sequel "The Burning of San Porfirio" are about the rise and fall of socialist Venezuela (with magic).
View all posts by Joel D. Hirst →
This entry was posted in Travel, Uncategorized and tagged arizona, Honor, Liberty, trust. Bookmark the permalink.