Of Taco Bowls and Presidents

There’s something funny going on in America these days. Lots of chatter, as there always is – but this year it’s got the green smell of panic to it. Bewilderment. Folks are perplexed. Of course, the collapsing of an old order and the emergence of a new is sure to generate a lot of controversy. The pundits are ablaze, this is their finest hour! No need for insight or clarity – shock will do, vitriol, rage. Befuddlement.

They are the only ones surprised.

The old order, which they pretend to mourn, was moribund – we killed it, those of us who shrugged and wandered off. Those of us who assumed the republic would always abide – that people would always be safe, choose security; that they would come back, like they always have. We who believed that progress – hollow and vapid – would cease to motivate. Truth is we surrendered our republic to the little man with a screwdriver removing the “girls” sign from the bathroom door at the elementary school where our children used to learn about Jefferson and Madison. And to what end? Nobody can articulate that – so please don’t ask.

Well, safe to say there are those who have now objected. A new order is on the horizon. But will it prove viable? Will it return the republic? Who knows.

Everybody experiences this year’s bizarreness in a different, very personal way. Some people are angry – rampaging through streets, closing down highways, fists flying. Thoughtful Peggy finds solace in “The Boy in The Bubble”; 80’s music as a soundtrack of a bygone era; the string band playing on the deck of the Titanic. Nostalgia. Some cry. The establishment donors who spent more than $25,000 per primary vote at least, I’m certain, are crying.

I reached my bizarre-o-meter’s limit today, when I found myself on the internet searching for taco bowls on the Trump Tower Grill menu (incidentally I found them, but not at the grill, at the café – and they do look quite good). I’m sort of an election junkie – perhaps to a fault; I’ll admit that. I read voraciously, listening to people’s words and positions – trying to bring nuance to the bumper stickers. How will we preserve prosperity? What will be the consequences of policy? This means that every four years I spend way too much time on RealClearPolitics, on Drudge, on Electoral Vote, on Foreign Policy – to name just a few. 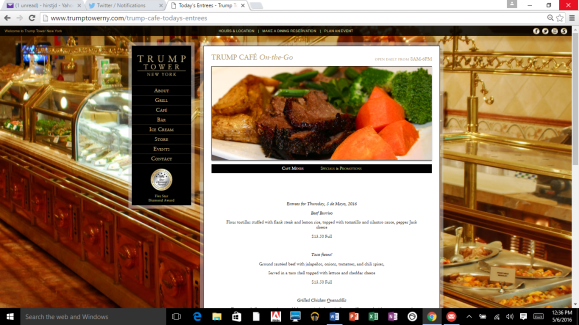 But never before during an election cycle have I found myself hunting through the menus of upscale New York restaurants – in search of a #CincoDeMayo Taco Bowl. Gone are the days I was reading the nuclear agreement with Iran, or Venezuela’s Bolivarian Alliance strategy, or the proposed reform of the Foreign Assistance Act. Gone, and good riddance. What good did it do, anyways? Look at our world on fire – we, who claim to have known better, made it so. Now I know – it was foolishness. Who needs it!

For the haters, please don’t take this as a sign of endorsement or criticism of this or that candidate. This cycle, I have chosen not to opine – for everything there is a season, like it says in Ecclesiastes. Which brings me around to my point – finally, I know. I tend to wander; ADD maybe. Definitely boredom, although this election season is anything but boring. My point, I promise, and I’ll be done: is it possible that we have lost our way? When those who are said to know better entertain the possibility that a “girls” sign hung on a door is somehow discriminatory – a hate crime; maybe that’s the moment for a reality check. And isn’t that where the people are leading us, this of all weeks? And is that such a bad thing? We have always been a country that must listen and learn from those who have built her. And those who build are, well – hungry for a taco bowl with a side of reality.

Joel D. Hirst is a novelist and a playwright. His most recently released work is "Dreams of the Defeated: A Play in Two Acts" about a political prisoner in a dystopian regime. His novels include "I, Charles, From the Camps" about the life of a young man in the African camps and "Lords of Misrule" about the making and unmaking of a jihadist in the Sahara. "The Lieutenant of San Porfirio" and its sequel "The Burning of San Porfirio" are about the rise and fall of socialist Venezuela (with magic).
View all posts by Joel D. Hirst →
This entry was posted in Uncategorized and tagged Liberty, politics, republic. Bookmark the permalink.

4 Responses to Of Taco Bowls and Presidents