You Have No Right Over The Life Of Another

I’ve been accused of “saying too much” in my writing – as if a writer can do anything else. That I should “hold more back”, I suppose the fear being that somebody might actually read something I write (not a huge risk) and come to the conclusion that I’m nuts. But, well that’s not my style. Life is also a journey of discovery – personal and for others too. Would I learn that way? Would others? Would my value be transmitted on – if in fact value it is? My fight, as a freedom fighter – yes, after twenty years on the battlefield (both literally and figuratively) I believe I have earned the right to call myself that. Do I pass that on, for others to learn from, and to do with what they will?

I attended this week, here in Africa, a presentation on the tactics and behavior of the latest terrorist organization. Forced abductions, rape, extortion, and the like. Par for the course; nothing I hadn’t heard before. After the presentation was done, I found myself reaching back in my own experience to Uganda – the Lord’s Resistance Army specifically – we all conjure the past, some more willingly, some less. “What do they do to keep their fighters?” I asked? The LRA would take their abducted nine-year olds, thirty of them at a time, pick one and tie him up and make the others walk by him single file taking a bite until the child was dead. They would force young men to rape their mothers while their family watched. They would randomly hand out machetes and force the little boys to fall upon each other; Hunger Games come to life. “What is their method to destroy the soul?” I went on. One time the LRA raided a village in Congo, seized a church on Christmas day, marching the parishioners out into the street and laying them on the ground in single file, clubbing their heads one by one with a log. They didn’t want to waste bullets. 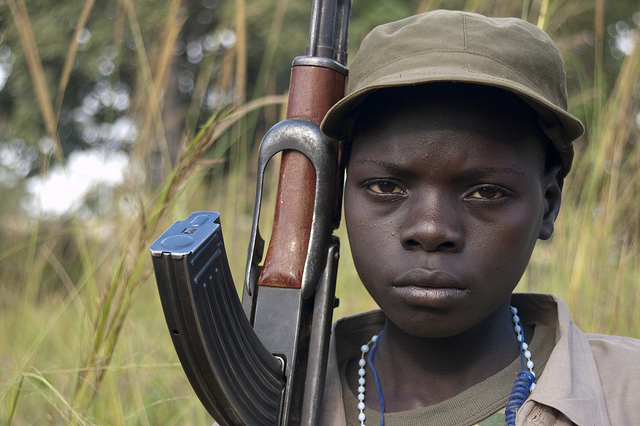 I wonder if I never realized just how diabolical the aforementioned acts were. Or maybe, immersed in my world – fighting the devil in my path – that behavior became “normal”; at least for a guerrilla group. It certainly was worse than my experiences in the Congolese civil war – but only by degrees. Destruction of the soul. Rape of spirit. Evil unfiltered; pure and unadulterated – perfect.

Mine is, I don’t think, a loss of perspective – not the numbness you hear about from shrinks. I am more cognizant than ever that each of these victims is a person; and my work has become increasingly individual as time has gone by. Maybe it’s just lack of surprise. Our ability to be shocked at what we see is impacted as our experiences become deeper, more varied – darker. At any rate, I found the conduct presented this week to be relatively mild – held up against the standards of evil in Africa.

Coercion – is it any different really? Brutality makes it more shocking, but force – we know about that, don’t we? Isn’t that what most political debates in the republic have descended into? Making others do what we wish. Getting our way. That, too, is part of the human condition. In the west we present it more elegantly, so it doesn’t offend as much. We write it into laws – pretending that we know better. We dress it up in a lovely pro-poor rhetoric. Our propagandists carefully construct victims, to pave the path of force. Sometimes it slips out of control – like in Germany, or Chile, or Argentina, or Portugal, or Venezuela. We rescue it, after a time – we freedom fighters do – and handing it back over to those who believe in authority we move on.

Until we are called again.

And so the process goes, in a never-ending cycle. I’m not discouraged, not really – I guess this is coming across rather gloomy – but 20 years in the trenches gives me the right to my darkness; my better angels are a little harried at this point, they could use a break.

I do imagine a world where the cycles end. In fact, that’s sort of what I wrote about in my latest novel – you can call it somewhat Utopian maybe.  You see Venezuela’s cycle has driven it into a particularly deep hole – and on my bad days I wonder if there’s any chance of recovery. But I take comfort in the fact that the answer is simple, deceptively so. Reject the attempts of control – both by you, and over you. You have no right over the life of another. There, I said it. Now, call me naïve – although that slight I certainly do not deserve.

For me, I will go on as best as I can, “saying too much” and “holding nothing back”. That liberty, at least, I have earned.

Joel D. Hirst is a novelist and a playwright. His most recently released work is "Dreams of the Defeated: A Play in Two Acts" about a political prisoner in a dystopian regime. His novels include "I, Charles, From the Camps" about the life of a young man in the African camps and "Lords of Misrule" about the making and unmaking of a jihadist in the Sahara. "The Lieutenant of San Porfirio" and its sequel "The Burning of San Porfirio" are about the rise and fall of socialist Venezuela (with magic).
View all posts by Joel D. Hirst →
This entry was posted in Honor, International Affairs, Travel, Uncategorized and tagged Freedom, Liberty, Literature, LRA. Bookmark the permalink.