Hemmingway and the Huge Hole

Do you ever wonder if Hemmingway would have blogged? I don’t know why I thought of that today. I was sitting in front of the Arizona Crater National Park – a huge hole in the ground result of a massive impact thousands of years ago. It’s impressive, as huge holes go, and I was struggling to find words that would capture the power that must have been unleashed to cause such a colossal depression, weaving them into the story of my journey – but for some reason all that came to mind was Travels with Charley; the Steinbeck novel where he drives around the country talking to his damn dog the whole time. You know the one, we were all forced to read it in high school. Maybe it had to do with my little dog waiting behind in my car. 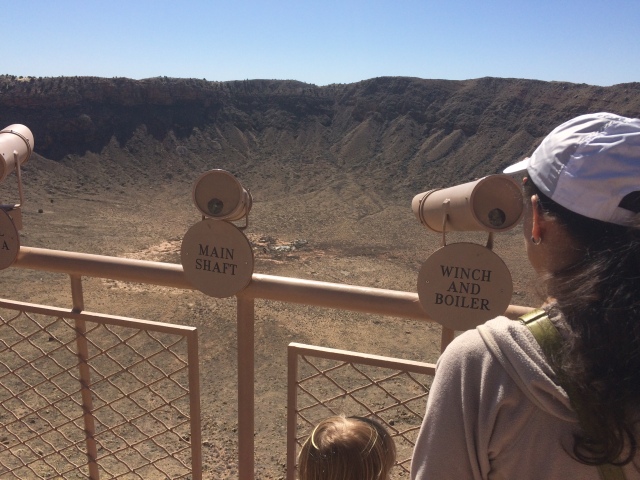 I breathed deeply, trying to focus; deciding maybe I would channel Hemmingway – the greatest of all travel writers – and by doing so scare away the ghost of John Steinbeck and his infernal hound (I think he was a hound, I can’t really remember – it’s been a long time since high school).

Now in point of fact I’m not even a Hemmingway fan; I find his writing sort of rambling and awkward. Like a really long email that you just can’t find the energy to open. I know, as a novelist myself I shouldn’t admit that – tantamount to some sort of personal confession. But I can’t help it; I put him in the same category as Gabriel Garcia Marquez, whose pornographic monotony is epitomized by his greatest work “100 Years of Solitude” which is exactly what I would need if I were ever to really try to finish that “masterpiece”.

I walked back from the massive hole down to my van, trying to think of how Hemingway would have approached his blog – assuming he would blog about it at all – when I was confronted by a massive raven staring down through the windshield at my tiny dog, who was shivering in fear in the front seat of the vehicle. Poe maybe? Now there is a writer I do like! What would Poe say about a huge hole?

I am still pondering that one – not at all convinced that Poe would have wasted his time on that huge, old crater. Despite the fact that he might not – I have, and have now wasted your time with my adventure. I do hope you visit the hole – it’s quite worth it; quite impressive really – even if the only one who might write about it is a lonely novelist with his fool dog.

Joel D. Hirst is a novelist and a playwright. His most recently released work is "Dreams of the Defeated: A Play in Two Acts" about a political prisoner in a dystopian regime. His novels include "I, Charles, From the Camps" about the life of a young man in the African camps and "Lords of Misrule" about the making and unmaking of a jihadist in the Sahara. "The Lieutenant of San Porfirio" and its sequel "The Burning of San Porfirio" are about the rise and fall of socialist Venezuela (with magic).
View all posts by Joel D. Hirst →
This entry was posted in Travel, Uncategorized and tagged arizona, Family. Bookmark the permalink.

1 Response to Hemmingway and the Huge Hole