I Write This for You

We don’t smile that much to each other anymore, my wife and I. Maybe it’s the toll of too many moves; of too many fights. Of too many 6 am mornings since our little man was born. They never tell you how hard it’s going to be, do they? On Facebook it’s all vacations and bloopers; charming, pretty people neatly dressed chuckling at the shenanigans of their infant. But life is lived between Facebook posts – when he throws up all the food she carefully fed him for dinner and she screams in frustration. When he gets an ear infection and has to be force-fed antibiotics three times a day, and he bites you.

When he screams through his 38 hour flight from Africa.

“Somebody should give that kid Tylenol PM,” I overhear. “Um, that’s my son – and he’s been flying for two days.” Anger, not at them per say – or at my little boy who is tired – or even at myself. Just anger, alive and powerful. “Well, we’ve been flying since India.” She says. Stupid woman. Um, ya, and you’re 60 years old – an adult. He’s three. Turning away – that’s right, cuz he’s been screaming in my ear the whole time; you think I like it? You think if I had the choice, I’d have chosen to make the trip like this? 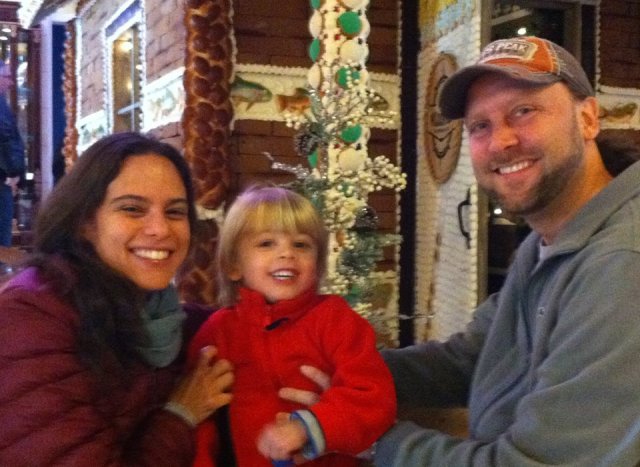 “Why don’t you ever write something to me?” My wife says to me occasionally. How do I tell her that I’m not an adolescent anymore – that love stories about two people on an idyllic beach, the naïve passion of youth, is easier than a story about baby vomit and exhausted fighting? Of course, those moments are important, the beach. And of course we had them – and of course we’ll have them again. But this is now, and we’re tired and a little worried.

“Is it because you don’t love me anymore?”

No, it’s not. It’s because we were evacuated three times in 2015 – two health problems and a terrorist attack. It’s because I have to provide for my little family in a complicated world where things are not written beforehand. It’s because what I have to say – from the heart – is not the same as my adolescent love; it’s hard to say, because it makes me vulnerable. And this isn’t the moment for weakness.

In Hawaii – on our honeymoon – everything was idyllic. The rain was sweet; the mountains flush with violet flowers. The wine did not inebriate, the food did not fatten – the sleep was undisturbed. I looked into her eyes and saw a future of endless possibilities. We had no money in the bank; no house; my car was a bit crappy. That didn’t make the flowers smell any less fragrant or the bouquet of $8 wine smell less elite. Life rolled out in front of us, endless meadows of fertile opportunity. As bright as the waves crashing on the beaches of Maui.

“Why don’t you ever write something to me?”

Does she understand that it’s because I don’t want it to be contrived; some love poem that speaks of a reality that everybody who has been together for a decade would know is false. A writer can’t be false, right? It wouldn’t inspire. Wouldn’t soothe. Doesn’t she know that to write this – what I am doing now – is not less meaningful? It is hard, agonizing – the most difficult thing to write because it is about me and her and our life. A life that I would not trade; but a life that is not always easy.

So this, my dear, is for you. It has been hard. We have fought – we have slept in separate beds. When I drink a glass of wine, I snore. When the rain falls over me, it is no longer sweet but instead shows a thinning head of hair. The flat stomach now takes double the time on the treadmill (and more careful selections at the supermarket); your blood-pressure medication is stronger than it used to be. We’ve had health scares, operations, and recoveries. We have looked together at the credit card bill and grimaced, turning poisoned words against each other in frustration. The future is not endless, the end is a wall that is approaching rapidly – mined with mortgages and college savings for our son and vacations we can’t afford and moving again, and again, and again – and yet again.

What does all this mean? It means that I love you. It means we are sharing a life. It means that what we have is real. Not a hallmark card or a lifetime movie – or the adolescent affection from the days when we looked at other haggard couples and smirked in mockery. From when I was the invincible, pretentious relief worker at the bar in Charles De Gaul laughing at the idiot with the baby in the carrier under one arm pulling the dog with the other – who is relieving herself right in the middle of the walkway – while the bags tumble onto the floor and the baby wakes and begins to squeal. No, it is now a life shared as we make the difficult decisions about where we will live, what we will do, how we will raise our son – decisions that are not limitless; we both have very clear limitations. Decisions that are not made from ideology – there isn’t much room for ideas at the end of a long day as one of us gets the boy out of his costume that he refuses to surrender while the other walks the dog in the cold winter night.

Would I change what we have? I’d love a million bucks – to hire a dozen nannies and buy a private jet so I don’t have to deal with TSA as I travel, and travel, and travel. I’d love a house on the beach, or overlooking a winery (that I’d never have to work – grapes are dirty); where they bring wine to my waiting cup at a fingers’ snap while I watch the Napa Valley sunset. I’d be overjoyed if there weren’t family concerns that weighed so heavily on both of us – or health issues or the possibility of unemployment at the business end of a terrorist’s gun.

But as I end a day of many obligations, and I sit down to think – I want you to know that this is for you. This is my life; our life. I love it as I love you; from my grumpy orneriness and my white panic and my blind frustration. But also from the best I have to offer, like my faithfulness and my commitment and my spirit that still dreams and still hopes even after a long day.

I write this for you.

Joel D. Hirst is a novelist and a playwright. His most recently released work is "Dreams of the Defeated: A Play in Two Acts" about a political prisoner in a dystopian regime. His novels include "I, Charles, From the Camps" about the life of a young man in the African camps and "Lords of Misrule" about the making and unmaking of a jihadist in the Sahara. "The Lieutenant of San Porfirio" and its sequel "The Burning of San Porfirio" are about the rise and fall of socialist Venezuela (with magic).
View all posts by Joel D. Hirst →
This entry was posted in Uncategorized and tagged Family, Love, marriage. Bookmark the permalink.

12 Responses to I Write This for You