Something Old, Something Familiar

Why do we go somewhere new to marvel in the old?

I’m on a road trip across the American southwest. The desert – my desert. I guess I’m looking for a place to rest my spirit, to soothe a troubled soul roaming in scenery I once knew well; where my adolescent invincibility blazed full and bright before it was lost in hard lands. I return here sometimes, because I always find that the big skies and the open spaces lead me somewhere I need to be.

Today it was Santa Fe, New Mexico. We conveniently forget that the oldest parts of America are not the ones colonized by the English. I lived for a time in Alexandria, Virginia and took great pride in visiting the church were George Washington worshiped, and eating in the restaurant where Jefferson held his inaugural ball. Back before the district was built, Alexandria was where the founders frolicked. But the truth of the matter is that while the British were only beginning to think about the west, the Spaniards were already here. In Santa Fe, specifically. Today I went into the oldest church in the United States – an old Catholic church made of adobe, built in 1610 in the northernmost part of the Spanish colony of Mexico; and looking like it belonged more in Central America or the Andes than the United States. Yet there it stands. 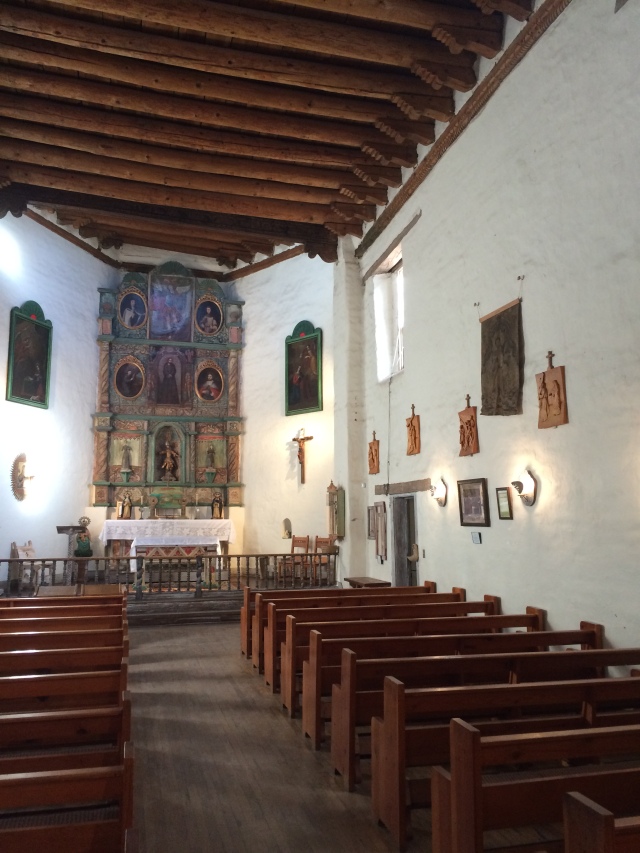 I went inside and sat on the back bench – it is still a functioning house of worship and I didn’t want to interrupt the parishioners (OK there was only one, Pope Francis needs to focus). I closed my eyes and let the echo of four hundred years of worship resonate in my consciousness. What had they been praying for, over the centuries – all those people who must have sat in the same seat as I was? Chances are average problems – similar to ones I think about. Work, family. A fight. Financial problems; a lost job. Occasionally perhaps a loss of treasure, of a great love. Misfortune. That is what brings us together, even across the centuries. I communed for a time with the spirits of those who had gone before.

Why do we go to the foreign and see only the familiar?

Bolivia – that’s where I’d seen this church before. The altiplano, an ancient church built with stones taken from the sacking of Tiwanaku and used to erect a monument to the “oppressor” God. Another journey – I smiled. I walked to ‘The Oldest House’ next door. The oldest modern house they should call it – although I suppose modern means something different to everybody. In this case, the first non-indigenous (Native American, First Peoples, whatever term you want to use) house – built shortly after the church. It is a tiny museum now, featuring pottery, old chests and assortment of other items that lasted through the town’s collapse and rebirth. A coffin with a skeleton in it – a Spaniard who had visited two witches for a love potion, which hadn’t worked, and after he’d accused them of being a sham they had beheaded him. No mystery what he had prayed for at the church next door. I found myself talking to the old couple managing the curio shop – I love America, everywhere you can buy curios. Me, I was buying a gift for my wife – an apology for a fight; fits of anger product of my troubled soul I suppose – my prayer, hopefully my forgiveness. I was telling the old couple of Timbuktu. “It is the same,” I said. “The adobe, the wooden scaffolding. I wonder if Timbuktu will experience rebirth, as Santa Fe has.” They smiled. Why would they care? They’d never been to Timbuktu.

I just checked in. Hotel Blue in Albuquerque. Blue – like the Radisson Blue. Piles of dead bodies by the elevator, blood running down the tile; crouching in protection of my son – to the sound of explosions and gunfire. I double check the locks, and put a chair in front of the door. I look through the window at the downtown area. Beautiful, in recuperation; new condos. Homeless men in the park next door – children on the streets of Bamako, twins mostly; for some reason I never bothered to ask why. Everything is the same.

Tomorrow I’ll continue my drive. I’ll try and write down my thoughts, if I have any.

Joel D. Hirst is a novelist and a playwright. His most recently released work is "Dreams of the Defeated: A Play in Two Acts" about a political prisoner in a dystopian regime. His novels include "I, Charles, From the Camps" about the life of a young man in the African camps and "Lords of Misrule" about the making and unmaking of a jihadist in the Sahara. "The Lieutenant of San Porfirio" and its sequel "The Burning of San Porfirio" are about the rise and fall of socialist Venezuela (with magic).
View all posts by Joel D. Hirst →
This entry was posted in Travel, Uncategorized and tagged Bolivia, New Mexico. Bookmark the permalink.